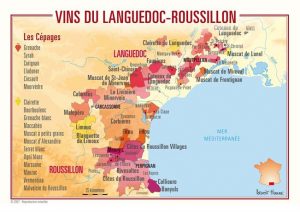 Tucked under the Massif Central, bordered by the Pyrenees and the Rhone valley and delimited by the Mediterranean, the Languedoc is an area steeped in history and viticulture. Cro-Magnon man gave way to a new arrival, Homo sapiens, who took advantage of climatic warming and settled in the region. In the 6th century BC the Greeks planted vines and developed trade in the area. Five centuries later, the Romans built the Via Domitia, the backbone of a whole network of communications that benefited viticulture. A land of travellers, but also of conquests, through which came in turn the Vandals, the Huns, the Visigoths, the Saracens and even the Normans, 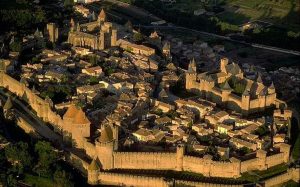 not forgetting the Hungarians. A land of poets and troubadours, who from the first millennium carried the Oc language throughout the south of France, as far as Limoges and even into Northern Italy. A land of purity which obliged the Catholic Church, in order to preserve its rights, to proclaim a crusade against the Cathars, who held a purer and less ostentatious faith. A land of the vine which, thanks to the Pierre-Paul Riquet’s Canal du Midi and the development of the railways, had more than 450,000 ha of vineyards in the nineteenth century. The Languedoc remains, despite the extent of uprooting at the end of the last century, the largest vineyard in the world.

The fate of Corbières wines has always been closely linked to those throughout the Languedoc. Devastated by the edict of Domicien in 92, they went through a renaissance during the creation of the abbeys of Lagrasse and Frontfroide, fell back following the crusade against the Albigoises and took off again in the eighteenth century thanks to the development of communications routes. They suffered another collapse in the late 19th century due to overproduction and fraud. In 1985 the Corbières was designated an Apellation d’Origine Contrôlée and is currently the largest AOC in the Languedoc and the fourth largest in France, with 15,500 hectares declared and a production of 640,000 hl produced by 38 cooperatives and 320 private producers. 93% of Corbières are red, 5% rosé and 2% white.

We use cookies to ensure that we give you the best experience on our website. If you continue to use this site we will assume that you are happy with it.Ok